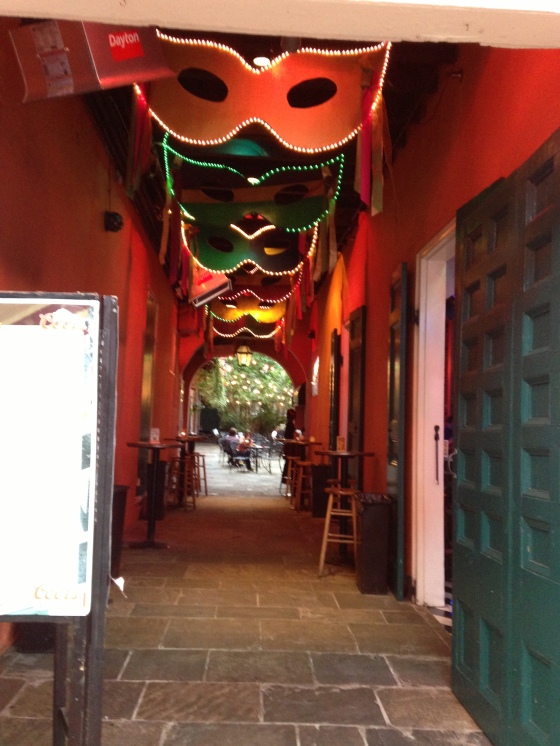 While I have been away from my blog, I have been traveling to a side of the country I have never been.  Last week I spent a few days in New Orleans.  It was my first time in the “Big Easy” and I wasn’t sure what to expect.  Like many of you, my idea of the city was a mixture of images I had seen in movies and the news coverage of Hurricane Katrina.

My trip to the city was for a conference, so naturally we stayed at a hotel across from the convention center.  Luckily the convention center is located just blocks from the French Quarter, where my coworker and I spent most of our trip.  We were also located next to the Harrah’s casino.  The city was a ghost town when we arrived around 5 p.m. Tuesday.  We walked up and down the streets taking the sights in.  However, what I saw was very different from what I had imagined.

I did see the historical buildings and monuments I had seen on TV and in movies over the years, but what I didn’t expect was a dirty damaged city still struggling to recover from Hurricane Katrina.  The streets were broken and cracked filled with puddles of murky water.  The city streets smelled of sewer and garbage, unless you happen to be passing by one of those wonderful hole in the wall restaurants.  Drugged out homeless people hung out along Bourbon Street, and shirtless youth performed with home made tap shoes for change.  Strip club after strip club displayed pictures of naked young girls, clearly visible as you walked by.  As we made our way to Andrew Jackson Square we saw horse drawn carriages, but unlike the carriages that line Central Park these carriages were pulled by horses who looked in desperate need of food and care.  By the end of day one we were left feeling disappointed and sad for a city that must have been so much more years ago.

On the second day of the conference the city was hit by two tornadoes with winds up to 90 mph.  As I watched from the window, I was in awe of how the weather could get so bad so quickly.  By the evening the storm had passed, and we were able to tour the city once more.  We had dinner at Mr. B’s Bistro, a formal dining experience in the French Quarter.  The restaurant came highly recommended by Urban Spoon and Yelp, but I was not impressed.  The scallops arrived slightly under cooked for my taste, and the soup had a strange after taste.  My cocktail however, had just the right amount of vodka.  More on this restaurant and others in my next blog.

By Thursday I was over the French Quarter, and the dirty streets.  However, the conference ended hours before we had to head to the airport, so we decided to take one last trip through the city.  I am glad we did, because the experience was much more enjoyable than earlier in the week.  The humidity had evaporated, and the sun was shining.  The streets were alive, with tourists newly arriving to the city.  We finally heard the jazz music we had heard so much about, and enjoyed some true New Orleans dishes like blackened catfish and fried gator.

I was sad to have to leave just when things started getting good, but alas it was time to return home.  I hear mixed reviews of NOLA.  Some gush that it’s an amazing city with lively streets and even livelier nightlife, while others talk about how dirty the city is.  I have to admit that unfortunately my experience was of the latter.  I will note that the majority of my time spent in the city was during the week, and I am sure that things get much better during the weekend.  Whether or not you visit will depend on what type of experience you are looking for.

Visiting New Orleans was an interesting experience.  I’m not sure I’ll ever return to the “Big Easy”, but I am glad I was able to tour the city and form my own opinion.  I truly hope that the city recovers some day.