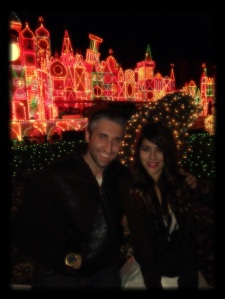 In speaking with a single guy friend the other day about his love life, the topic of “mileage” came up.  Mileage, unlike baggage is not necessarily a bad thing.  In dating terms having mileage means that you have had experience in relationships/dating.  Baggage is often an attempt to say someone is undesirable, because they have yet to move on from a past experience.  Unlike people with baggage, people with mileage aren’t bitter with the world.  They don’t hate all men/women.  They’re just living life, wracking up knowledge and experiences that are valuable.

My friend discussed his difficulties with finding the right woman.  He’s ready to settle down, but having trouble finding the right girl.  Unlike many men who refer to life experiences as “baggage,” he wanted a woman who has lived and experienced both highs and lows.  He understood what many don’t, that you have to go through the bad in order to ever really appreciate the good.

When I was young, and my mother told me that she married my dad at 17 I thought she was crazy.  I was only around 11 years old, but I remember thinking that there was no way I would marry someone right out of high school.  My dad was only the second guy she had dated, and the first person she slept with.  While I’m thankful for that (due to the fact I would not exist otherwise) I thought it was crazy.  My parents are still married by the way, so I will say it does work for some people.  Not for me though.  I knew in order for me to be 100% committed, I would have to know for certain he was the one for me.

My dating life was crazy, but I wouldn’t trade those experiences for anything.  With each jerk I grew increasingly able to spot out the wrong behavior, and more in tune with what I deemed was what I needed from a man.  I turned down relationships I knew weren’t right for me, and that’s hard for a lot of people.  Many women I know would rather settle, then wait for the right guy.  Cereal monogamists don’t necessarily get ahead in life.  Staying single allowed me to have an amazing life, filled with fun and heart ache.  But for all of it I am grateful, and without it I wouldn’t be in the amazing relationship I am today.

While many of my friends hate their exes or the guys who did them wrong, I have no ill will.  I’m able to be friendly with everyone I’ve dated, because they were a means to an end. Educational experiences, I’m better for having.  If you’re single, don’t turn away someone because they’re experienced.  If they have some baggage they know what it’s like to be done wrong, so they’ll be grateful when you get it right.  Don’t get involved with someone unstable, or someone who hasn’t sorted out their life.  However, don’t discard someone for having had a bad brake up, or wanting to be single for a while.

That’s my humble opinion for the day.